Linux Mint, which shares with other Linux distros, runs on low-power hardware. You can run Mint on any of your Windows 7 PCs. All Linux Mint needs to run is an x86 processor and x64 (latest version), 1GB of RAM (you’ll be happier with 2GB or 4GB), 15GB of disk space, a graphics card that works at 1024 x 768 resolution, and a CD/DVD drive or USB port. That’s it. Heck, you can run Mint on pretty much any Windows XP PC, if you have one around.

Mint, like the other Linux desktops, is totally free. It won’t cost you a penny.

But what if you don’t like it? That’s not a worry either. You can try Mint, and if it’s not your cup of tea, you just reboot back to Windows, and you’re done. No harm, no foul.

So let’s get started. First, I’ll show you how to try Mint out, then how to install it on your machine.

First, download the Mint ISO file. This is an image of the Mint operating system which you can use to run or install the operating system. It’s about 1.8 GB, so it may take a while to download. 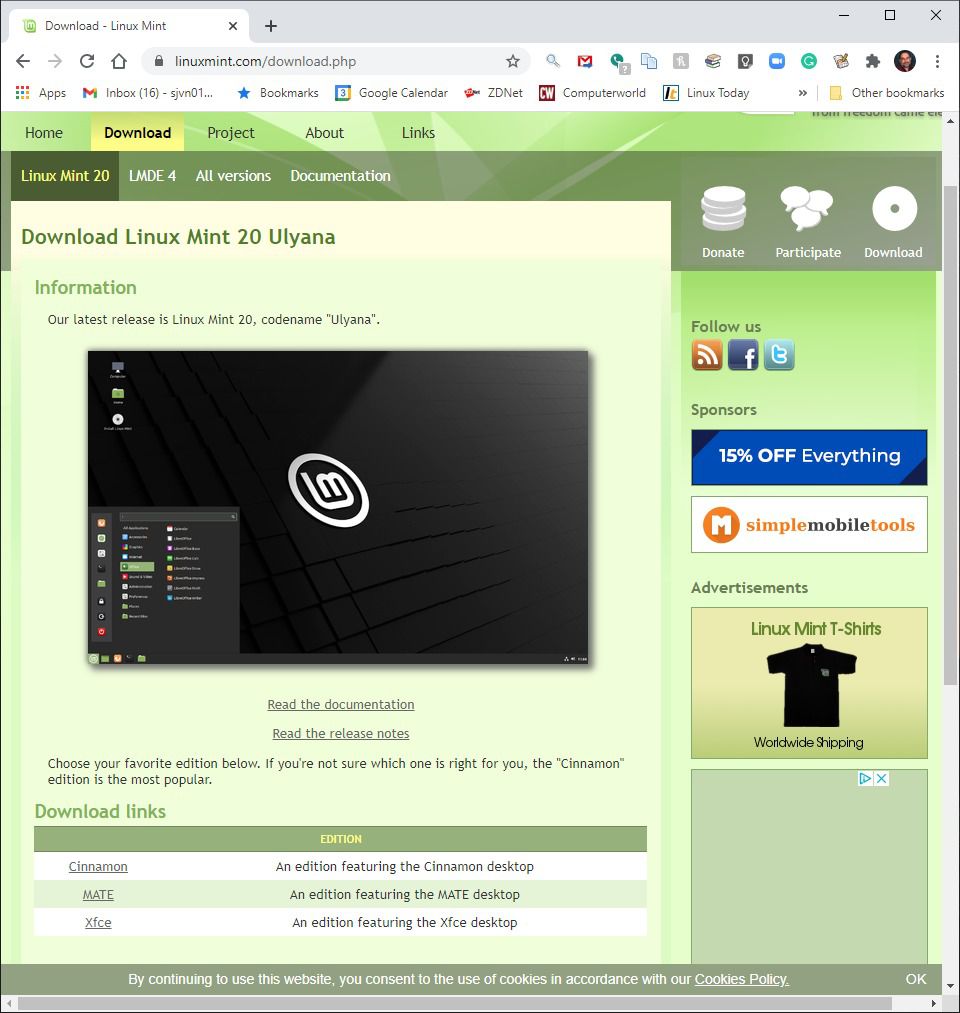 You’re given a choice of desktops. For your first Linux desktop, I recommend going with the popular Cinnamon desktop. Once you know more about Linux, and if you want to explore, you can try one of the others.

Burn the Mint ISO file to a DVD or USB drive

You’re going to need an ISO burner program. I recommend freeware programs ImgBurn for DVDs or LinuxLive USB Creator for USB drives. Other good choices are Yumi for Windows or UNetbootin. 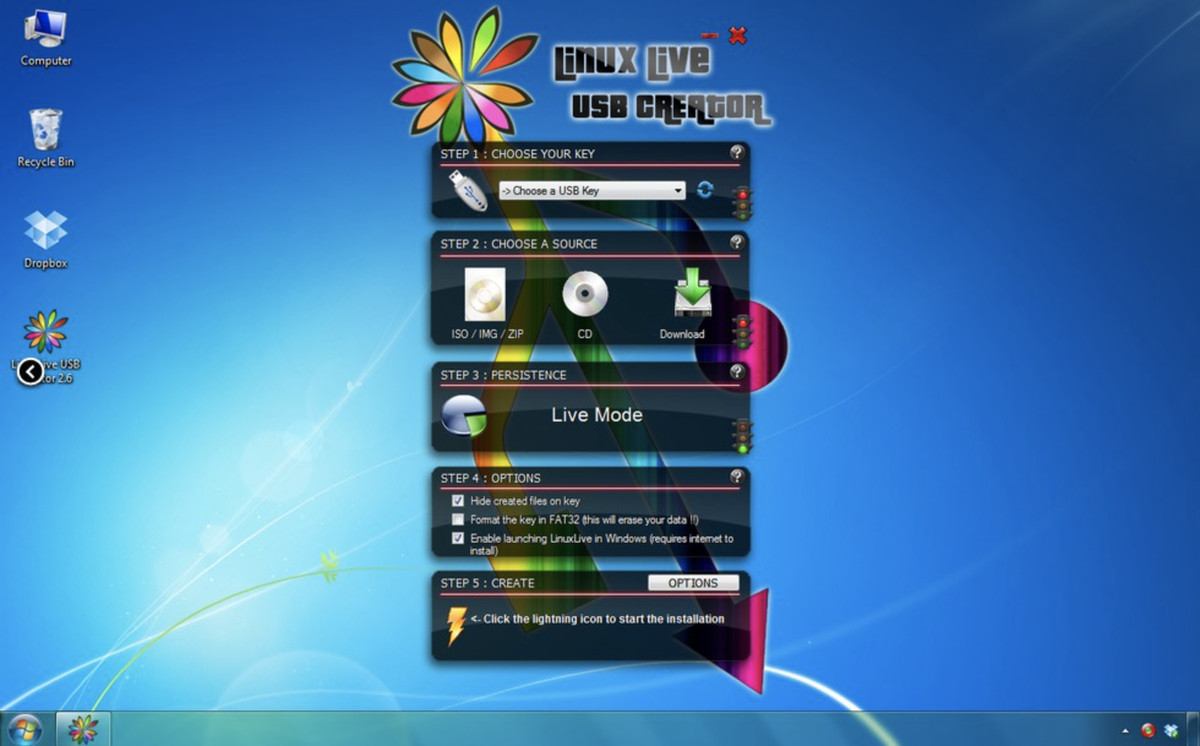 Once you’ve installed the burner program on your Windows system along with the Linux Mint ISO file, use that to burn the image to a USB drive. Note: while you can install Mint on older systems using a DVD, it’s really slow. And if you need to use a DVD, first check your newly burned disc for errors.

When you create a USB drive, you’ll be given the option to set it up with persistent storage. With this option, you can allocate up to half of your storage for a persistent overlay file. This lets you store new programs, files, settings, or whatever, just if that overlay file was a mini-hard drive. This way, you can kick Mint’s tires without installing a thing or changing anything on your PC. If you don’t like it, you’ll have lost nothing but some time.

Another handy thing about this method is that if it turns out you like Mint, you can use the USB drive as a handy pocket computer. Besides Mint, you can also use it to store your own programs, files, and desktop setup. This way, you’ve got Mint with you wherever you go and you can easily use any public computer safely with your own operating system and program.

Set up your PC for an alternative bootup

Now you’re going to reboot your system, but stop the boot-up process before Windows comes up so you can get to your PC’s UEFI or BIOS settings. How you do this depends on your system.

The best thing is to do a Google search for your specific PC or laptop brand and “UEFI” (or, with older PCs, your computer brand and “BIOS”). For example, with Dell PCs, you tap the F2 key to enter system setup; with HP, you tap on the Escape key once a second; and on Lenovo systems, you tap (Fn+) F2 or (Fn+) F1 key five to 10 times after the power-on button is pressed to get to system setup.

Once you get to the BIOS or UEFI, look for a menu choice labeled “Boot,” “Boot Options,” or “Boot Order.” If you don’t see anything with the word “boot” in it, check other menu choices, such as “Advanced Options,” “Advanced BIOS Features,” or “Other Options.” Once you find it, set the boot order so that, instead of booting from the hard drive first, you boot from either the optical drive or from a USB drive.

After your PC is set to boot from an alternative drive, insert your DVD or USB drive, reboot, and select “Start Linux Mint” from the first menu. In a minute or so, you’ll be running Linux Mint.

Take a few days if you like. Windows is still there. Anytime you reboot without the drive, it will go right back to Windows.

Like what you see? Then let’s install Mint on your PC.

Like any serious upgrade, start with making a complete backup of your Windows system. Installing Linux shouldn’t hurt your Windows setup in the least, but I don’t believe in taking chances.

It used to be that installing Linux on Windows PCs that were loaded with UEFI and Secure Boot (a standard that makes sure you only boot approved software) was a major pain. These days it’s a non-issue. But if for some reason, you can’t install Mint with Secure Boot running on your PC, you can always turn off Secure Boot. There are many ways to switch Secure Boot off. All involve going to the UEFI control panel during the boot process and turning it off.

Now, let’s get on with the actual installation.

Make sure your PC is plugged in

This may sound elementary, but installing an operating system will give your computer a real workout, and the last thing you want is to run out of battery power in the middle of installing Linux Mint. You’ll also need an internet connection (the faster the better) and at least 8GB of free disk space.

Set up a partition for Linux Mint from Windows

To make sure you have enough space, you may want to head back into Windows, log in as the administrator, and use its disk manager to shrink the main C: disk partition to make room for a Linux partition. You can get by with as little as 15GBs but I prefer to give Linux at least 100 GBs. Then I reboot into Linux. 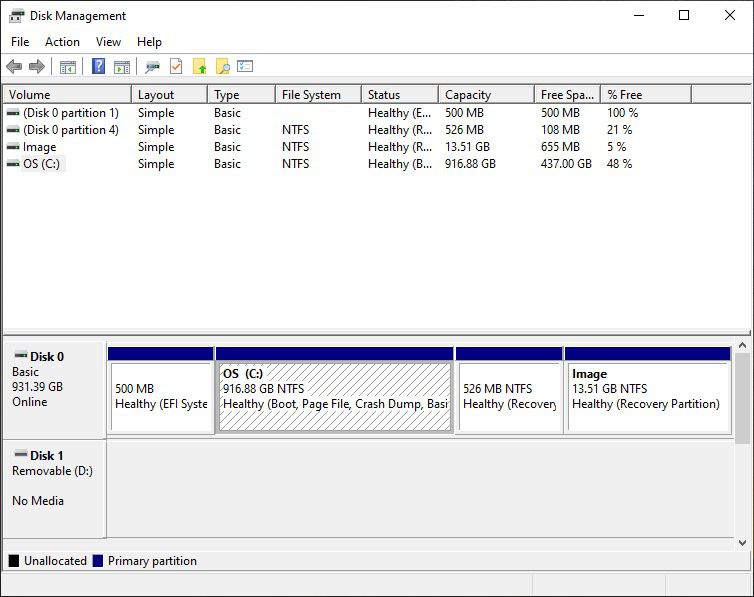 Once you have the Mint display up, one of your icon choices on the left will be to install Mint. Double-click it, and you’ll be on your way.

Name your system, your user ID, and set up your password

On your setup journey, you’ll be asked to choose a keyboard layout, give your system a name, pick out a username for yourself, and come up with a password. You can also choose to encrypt your home directory to keep files relatively safe from prying eyes.

Most of these decisions are simple. The one critical option can be how to partition your hard drive. This can be a real pain. But since we’ve done that in Windows earlier, you don’t need to worry about it here. In this case, pick the first option on the Installation Type menu that reads: “Install Linux Mint alongside them.”

That done, you’ll see a screen like the one below. 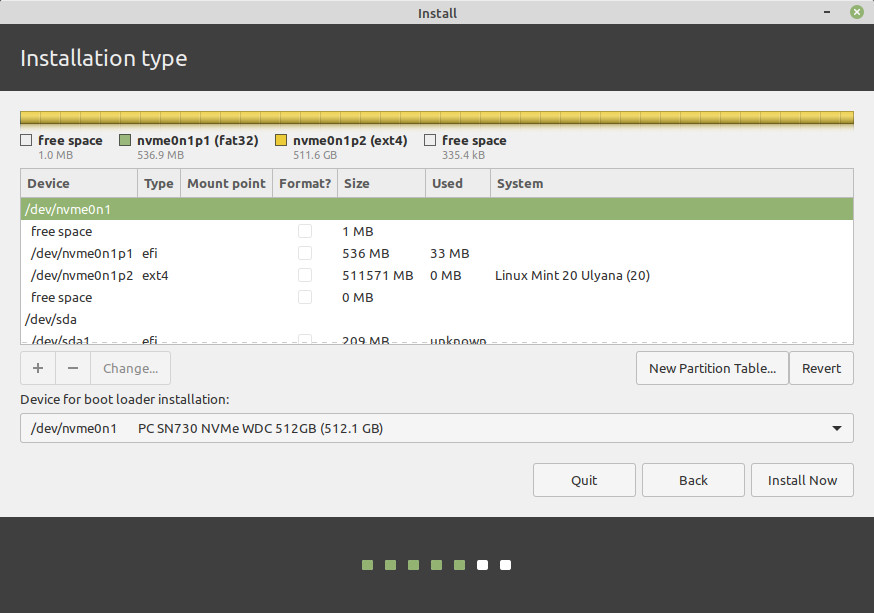 Next, you must choose which file system to use for Linux. The most popular choice is Ext 4. You also have to pick a mount point, the root directory Linux will start from. Here, I suggest you do as I do and select the common “/” for your mount point.

Set up a system snapshot

Mint 20’s setup menu enables you to set up a system snapshot with Timeshift. This way, if something goes wrong, you can restore your system files and get back a working system. I highly recommend doing this. While you’re at it, set up a regular Timeshift schedule. I set mine up on a weekly schedule.

Next, check to see if your computer needs any additional drivers. To do this, open the applications menu, search for “Driver Manager,” and run the program. This will examine your system and search for any new or missing hardware drivers — usually, these are for graphic cards or Wi-Fi chipsets. It’s a good idea to do this even if you have a completely vanilla, generic laptop. If Driver Manager finds an appropriate update, just go ahead and install it.

You can also install proprietary multimedia codecs such as drivers to watch videos. I recommend you do this as well.

Update Mint to the latest version

You should also set it to update your system to the latest version of Mint. Unlike Windows, when you update Mint, you’re updating not just your operating system but all of your installed programs. This includes your web browser, office suite, and any other programs you’ve installed with Mint’s easy-to-use Software Manager.

To get your system current, click on the menu bar’s shield icon. By default, you’ll find the menu bar on the bottom of the screen, with the shield update icon on the right. Once clicked, it will ask you for your password and ask if you really want to update your system. Enter your password, say yes, and after it updates, you’ll be ready to put your new up-to-date Mint system to work.

The setup routine also offers to let you look at system settings and find new programs with the Software Manager, but since you’re probably a new user, you can skip those for now.

Reset your computer to boot from your main drive

Finally, go back to the beginning and reset your system to boot from your hard drive. Then, the next time you boot up, you’ll be given a choice as to which operating system you want to boot from. No matter which one you pick, you’ll get a few seconds to switch to the other operating system.

How to Make your old Laptop work like NEW

How to Route your all emails for a Domain to a Cus...